Gender mainstreaming: What? Why? How?

The 2008 Committee of Ministers Recommendation on the inclusion of gender differences in health policy, requires member states to “make gender one of the priority areas of action in health through policies and strategies which address specific health needs of men and women and incorporate gender mainstreaming”. 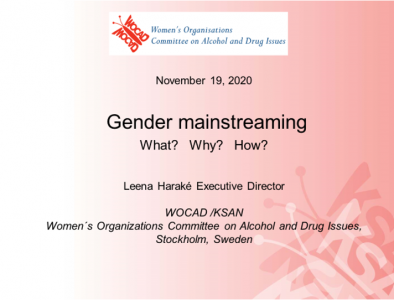 The Co-operation Group to Combat Drug Abuse and Illicit Trafficking in Drugs (Pompidou Group) has been a pioneer in the integration of a gender equality dimension in drug policies in Europe, with activities since 2014. The study “The gender dimension of non-medical use of prescription drugs in Europe and the Mediterranean region”

WHAT is Gender Mainstreaming?

The women’s rights movement, an increased presence of women in decision-making, strong commitments to women’s human rights at all levels, and the development of gender studies and sex-disagregated data, have all helped unveiling the fact that public policies often did not take into account women’s differing needs and situations.

a long-term strategy that goes hand-in hand with specific policies for the advancement of women.

When properly addressed and implemented, gender mainstreaming is a transformative approach with a great potential for social change. It is a long-term strategy: every step counts towards this change of approach, but it will require some time until it is fully and automatically integrated into policy – making. There is wide consensus about the effectiveness of a dual approach towards gender equality, combining gender mainstreaming and specific measures for the advancement of women, to ensure better policy making and better use of resources. Such dual approach is also implemented in the UN 2030 Agenda for Sustainable Development, which includes a stand-alone goal on gender equality and the empowerment of women and girls (SDG 5), as well as gender-sensitive targets in other goals.

GENDER MAINSTREAMING IS NOT:

More information on gender mainstreaming can be found from European Institute for Gender Equality.